Whether YouTube video support surround sound is a common question among YouTube enthusiasts. If you want to listen to audio or stream live video on your home theater from YouTube and wonder whether it will deliver surround sound to your speakers, read on to learn more.

Currently, YouTube only supports 5.1 surround sound playback on Youtube TV. If you do a surround sound test on YouTube, you will hear distinct Left and Right audio channels only. While you can upload 5.1 or 7.1 audio, Youtube will convert it and play it back as stereo. YouTube only sends two channels of analog audio output or stereo audio.

With surround sound, multiple audio channels are combined and then sent to multiple speakers. For example, a 5.1 surround system is a 6-channel system in which 5 channels are sent to 2 front speakers, 2 left/right speakers, and a subwoofer. However, most audio systems only have two channels – left and right or stereo, like regular radios.

What Is Surround Sound?

Surround sound is a term technically used to refer to specific multi-channel systems that enrich the fidelity and depth of sound reproduction from speakers that surround the listener. 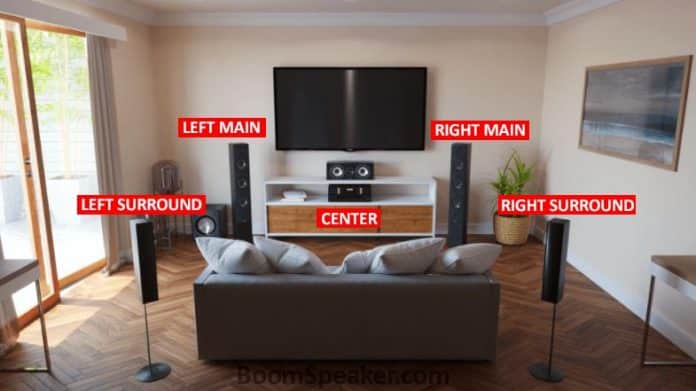 Before surround sound, theaters had three screen channels of sound. The sound was played from three loudspeakers located in front of the listener – right, left, and center. The sound adds one or more channels from loudspeakers to create the feeling of sound coming from any direction around the audience.

Also, there are several different formats of surround sound based on the various recording and reproduction methods and the positioning of the other channels. Besides, some special microphones can record surround sound by picking up sound from three or more directions. This is, however, not the standard way of producing a surround soundtrack.

Nearly all movie surround soundtracks are created in a mixing studio, where many different audio recordings are placed on other audio channels.

To learn more, read our article on surround sound systems.

To answer this question more precisely, you need to understand that surround sound is a codec. As a codec format sound, it assigns audio signals to different speakers in different positions relative to the listener.

For instance, if you play music through a 5.1-speaker sound system, to make the output audio surround, each speaker must understand the signal and know what to play.

The main idea of the surround sound codec is to complete the combination of 6 audio channels and send them to receiver devices. As a result, the receiver should decode the original codec to restore the signals to speakers correctly and naturally.

YouTube does not currently decode those codecs which is the reason why YouTube may not play surround sound. But why not? Nearly all the personal audio devices in our homes are built with two audio channels only. As a result, the extra audio channels that are decoded will usually have nowhere to go. It, therefore, makes no sense to add more decode functions for the additional surround channels.

There is, therefore, a lot of debate on whether YouTube supports surround or not. Although some people say the surround works on their system, we cannot confirm that yet when you play it, all you can hear is stereo left and right audio.

You should also ensure that your Chrome browser is set up properly when playing 5.1 surround. Check out our article on how to get Google Chrome 5.1 surround sound.

Youtube supports 5.1 audio for upload, but not playback. This means that while you can upload 5.1 audio, YouTube will play it back as stereo.

Youtube supports 7.1 audio for upload, but not playback. This means that while you can upload 7.1 audio, YouTube will play it back as stereo.

Dolby Surround Sound is a form of Doly audio introduced by Dolby Laboratories in 1982. Youtube supports the upload of videos with Dolby audio but does not support Dolby audio playback.

This means that when you upload a surround sound either in the 5.1 or 7.1 channel formats, YouTube folds the extra channels into the left or right channels.

As a result, YouTube takes the extra audio channels from the surround audio format sound and renders them into left and right channels. Therefore, users can upload 5.1 or 7.1 audio and video, and YouTube converts them to stereo channels so that the sound fidelity of the film or audio signal is not lost.

Therefore, the YouTube encoder takes all the available audio channels, rearranges them into a stereo format, and ensures that you do not lose the information on the original surround sound.

In one of their blog posts, YouTube announced that they would support 4K Plus with unlimited premium home streams. Although there is no mention of the type of content supported, YouTube has directly referenced the movies. It is assumed that the other content will still majorly support the standard stereo audio.

On the other hand, it is worth noting that YouTube announced it would only make the rollout to “select devices” without any reference to what devices will be supported or not supported. It should, however, be more evident that Roku devices may not be supported immediately due to the current standoff between them and YouTube TV.

“We’re adding 5.1 Dolby audio capabilities for all YouTube TV members, which has been one of our biggest requests. This will start rolling out to select devices over the coming weeks, so you can soon watch movies as if you were in the theater, and enhance your watch experience even more with surround-sound audio.” – YouTube.

Is There An Alternative To Realistic Audio?

When playing audio from YouTube, you will not be able to get surround playbacks. However, there is an alternative to this problem. OPSIS II speaker offers an alternative solution to this challenge. The speaker has a robust internal spatial decoding technology with two channels of input designed to recreate the immersive nature of 360-degree sound.

You will, therefore, not have to worry about audio codecs or hardware setups anymore. This is because OPSIS II seamlessly recreates 360-degree audio from any stereo audio input. However, the quality and efficiency of the played sound depend on the original sound as recorded by the artist and the quality of production.

The answer here is yes. You can enjoy a video’s sound in all directions with YouTube spatial audio.

How Do I Know If My Video Supports Spatial Audio?

To establish whether your video supports spatial Audio, you need to fire up a supported video (Apple TV+ is a good example), and open up your device’s Command Centre by swiping it down from the top-right corner of the screen. After that, press and hold the AirPods Pro volume icon. On the page that opens, you will see a Spatial Audio icon, that way. You shall have known that it supports spatial Audio.

Well, Spatial Audio is a sonic feature that is solely exclusive to AirPods Pro and AirPods Max. It is a technology that adds surround sound to Apple’s premium audio wearables. In fact, utilizing dynamic head tracking brings on board a theater-like audio experience to the movie or video that you’re watching so that it seems as if the sound is coming from all around you.

Does Spatial Audio Work with All Songs?

Yes, spatial audio works with all songs. If you’re using Apple Music and AirPods Pro or AirPods Max, then spatial audio with Dolby Atmos should be on default.

Yes, you can watch YouTube HDR live streams on any device that supports the format.

You can stream on most modern Android smartphones, Chromecast Ultra devices connected to HDR TVs, HDR-capable smart TVs and streaming devices, and Windows and Mac PCs with HDR graphics support.

So the bottom line is that YouTube only surrounds stereo audio, not surround sound. For more information, you can check out this Google form that confirms it.