One of the strongest and oldest debates in the audio world has been viny vs cassettes. Which one of these vintage audio sources is better for your audio need? In this article, we will explore this question.

Vinyl preserves the original sound of the music better than tapes. Cassettes give less nuance since to their lower fidelity.

In this post, we will explore those questions and give my opinion on which format is better overall.

In terms of audio quality, CDs are better than vinyl and vinyl is better than cassettes. This is because CDs are uncompressed digital recordings while vinyl is analog recording. However, some people prefer vinyl over CDs because it doesn’t digitize the audio. Vinyl and CDs are better than cassettes because they are better at preserving the original and intended sound of the recording or music. The only advantage that cassettes offer over vinyl is their smaller size which means they are more portable. However, cassettes are not very popular today and you will find a lot of vinyl collectors but very few cassette collectors.

Read on to learn more.

Vinyl vs Cassette vs CDs

Vinyl is a type of music format that has been around since the 1950s. It was invented by Victor Company, which later became known as “Victor,” It was called an LP (Long Play) at first because each side had about 15 minutes per song. Nowadays, vinyl is making a big comeback. People love the unique sound that it provides and that you can see and feel the record itself.

Cassette tapes were first invented in 1963 by Philips but didn’t become popular until the late 1970s / early 1980s when Sony started manufacturing them. They got their name from the type of tape they use, consisting of two spools.

Compact Disks (CDs) were first introduced in 1982 by Philips and Sony.

They got their name from Compact Discs, which they are made up of – a disc about 120 mm in diameter and just over one millimeter thick. CDs replaced cassettes tapes as the most famous music format during the 1990s. However, they lost market share to digital downloads around 2005.

One cool thing about CDs is that they don’t get scratched as easily as vinyl records do.

What Is Vinyl Used For?

The primary use for vinyl is as a storage medium for music. It was the dominant format for distributing music from the late 1940s to the early 1980s.

Vinyl records were replaced by compact discs in the early 21st century, although they continue to be manufactured and sold.

Other uses of vinyl include:

What Is Cassette Used For?

Cassette has also been used for the same purpose that vinyl is. It can record music, make copies of original recordings and even play it back on a cassette player or computer recording device.

Other uses of cassettes include:

What Are CDs Used For?

CDs are commonly used for music, though you can also use them for data storage. They offer a great way to store large files or collections of songs.

When it comes to music, many people prefer CDs because the sound quality is better.

Additionally, CDs tend not to skip as quickly as other formats.

This is why many people still buy CDs, especially if they have an extensive collection of music that they want to keep safe and sound great.

Some of the advantages of vinyl include:

They can be scratched and damaged, making them difficult or impossible to play.

Vinyl records are typically associated with the concept of music listening. Also, vinyl is a popular choice for DJs.

On the other hand, Cassette tapes offer better sound quality for some genres compared to vinyl (i.e., hip hop).

You can also play cassettes in vehicles without needing an auxiliary port or CD player.

The best option between these two is typically determined by what you prefer to listen to. Both options can offer hours of entertainment and enjoyment if chosen correctly.

Cassettes and CDs are two music mediums that are no longer popular. Cassettes were first invented in the 1960s but became more mainstream in the 1980s.

CDs were developed shortly after cassettes and have since replaced them as a preferred form of listening to music.

Cassettes can hold about an hour’s worth of songs, while CDs can hold up to 80 minutes of music at once.

They both produce good sound quality when played on high-end devices.

As technology has improved over the last few decades, music listeners have traded their vinyl records for CDs or MP threes.

While it’s true that more compact discs give you better quality sound, some people are turning back toward vinyl because of its distinctive sound.

Vinyl provides a warmer, richer tone than CD s and other digital formats.

When choosing between vinyl and CDs, consider going with vinyl if you love the sound of music and want to enjoy every note.

However, if you’re looking for a format that will give you better quality audio with less noise interference, then CDs are the way to go.

Audio quality is better with a cassette player than with the traditional CD. But there are some issues to consider before purchasing one.

A common issue with cassette players is that they require high maintenance levels and will need repairs from time to time.

In addition, it cannot be easy finding replacement parts for old models once the original ones break down completely.

There are a few undeniable things about the debate between vinyl and digital rages. Vinyl records offer a warmer, richer sound than their digital counterparts. They also have the potential to last much longer.

However, vinyl has its drawbacks, which we talked about above.

Cassettes and MP3 players tend to differ in audio quality. While both are digital formats, MP3 files are compressed to make them smaller and easier to store on smartphones.

A cassette tape has a higher dynamic range which is the difference between the loudest sounds that you can hear before they’re distorted.

However, cassettes have an intrinsic drawback. Sound quality tends to degrade with each successive copy you create.

The Best Players For CDs, Vinyl and Cassette

If you are into the oldies, nothing beats a speaker system that pays homage to the good ‘ol days and allows him to play cassettes in their original format. 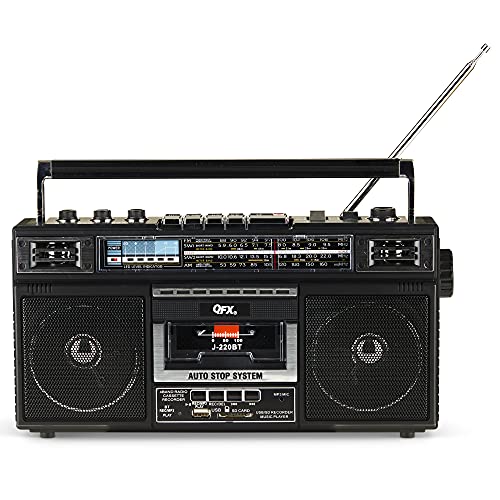 With this player, you can celebrate the era in classic style with the QFX J-220BT ReRun X Cassette Player.

Here’s why we chose the Quantum FX J-220BT for the retros: Finally, not only is this system portable, but it’s also noticeable. The retro lovers love showing his sense of style wherever he goes.

There are many good vinyl players out there, but you need a good speaker to complement them. Check out our guide to the best speakers for vinyl record players to learn more.

There are many CD players out there from many brands, but we recommend Panasonic stereo players from back in the 2000s.

Vinyl, cassettes, and CDs are all great methods of listening to music. They each have their own pros and cons. But in the end, it comes down to your personal preference.

Whichever choice you make, make sure to buy a high-quality product to enjoy your music correctly.