This means you could use the same exact speakers for surrounds and surround back.

Let’s get into some additional details about surround vs surround back speakers.

The main difference between these speakers lies in their placement and the sound system configuration. Let’s see more on this below.

In a surround system, two surrounds are placed beside the listening area, angled towards the audience. Some audiophiles also position them slightly behind the seat.

On the other hand, surround backs are always placed behind the listening area. These speakers are positioned to ensure the sound originating from them is projected directly to the audience in the listening room.

Depending on the nature of the room, surrounds and surround backs are often raised approximately two feet above the ear level. This is essential for preventing objects from interfering with the flow of sound to the audience.

The type of surround system configuration is the main difference. In most homes, you find 5.1 sound systems. However, 7.1 systems are also relatively common. Which of these speakers work with each of these configurations?

The 5.1 configuration uses five regular speakers and one sub. These loudspeakers must be positioned in suitable locations for the audio system to produce an immersive sound experience. 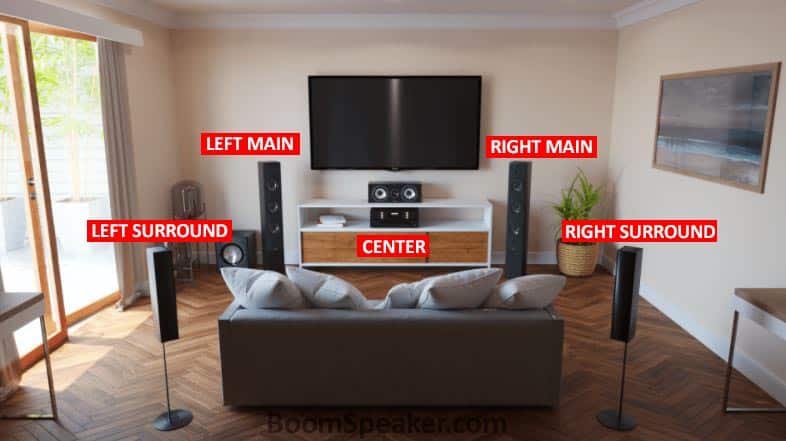 You should position two regular speakers in front. They are known as front left and right speakers.

At the same time, you should position one at the center of the front speakers (center speaker). Place the remaining two beside or slightly behind the listening position, and we call them surrounds or surround speakers.

Typically, a subwoofer is also added to the 5.1 setup which is the (.1) in the name. It can be placed anywhere within the listening room, as the low frequencies it produces are omnidirectional. However, for an easier connection to the receiver, most people put it closer to the front.

From this, we can see that surrounds work with 5.1 sound configuration but surround backs are not included. You can learn more about the 5.1 setup in our surround sound system guide. If you setup these speakers but are experiencing issues, check out our article that explains why some of your surround sound speakers may stop working.

7.1 configuration is similar to the 5.1 system, except for the two additional surround back speakers. It has seven speakers and a single subwoofer. 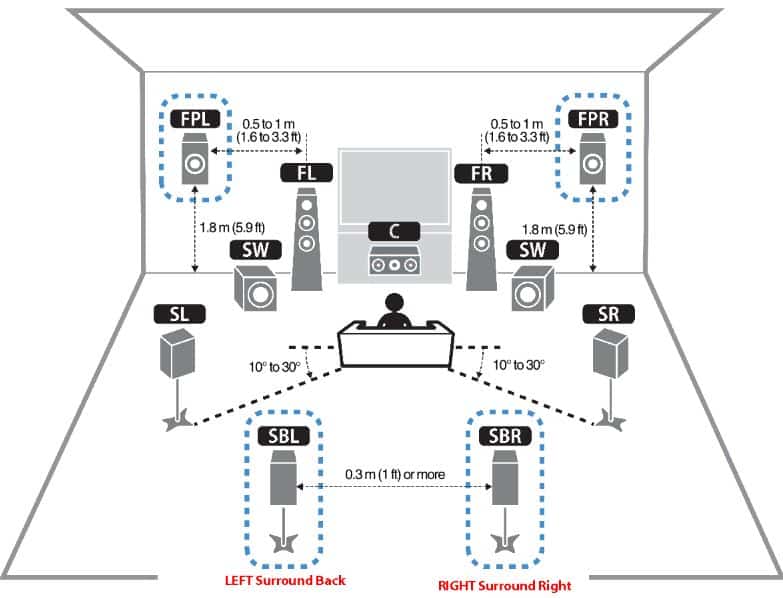 The two additional speakers are the surround back. These speakers are located behind the listening areas, angled towards the audience.

The 7.1 configuration requires an eight-channel AV receiver due to the increase in the number of speakers. You can learn more about the 7.1 setup in our surround sound system guide.

Notably, surround backs work with all system setups above 5.1.

What’s the Role of Surround and Surround Back Speakers?

The purpose of surround speakers is to reproduce the music and sound effects. By reproducing a similar range of frequencies to the front speakers, they improve the listener’s experience.

On the other hand, the role of the surround back speakers is to amplify the background surround sounds.

This means the right front, left front, and center speakers are the most important in a surround system.

They reproduce the much-needed dialogue and essential parts of the music and sound effects. However, surrounds and surround backs also play the critical role of complementing them.

Some surround sound systems have front height speakers. You can find out more about this in our front height vs surround back speakers guide.

Here are the most critical differences between surrounds and surround backs:

From the above, we can see it’s clear that the main differences between surrounds and surround backs lie partly in the placement.

Some front and center speakers can also be used as surrounds and surround backs. However, you can get the best listening experience by choosing speakers designed to work as a surround or surround back.

Key Types of Surround and Surround Back Speakers

Surround speakers are classified depending on how sound gets to the audience. So, we’ll consider how different speakers project sound waves towards the listener.

You should choose one that’ll deliver the best. The type of your room and listening preferences should guide your choice.

Here are the top options:

Many people use direct-radiating speakers as surrounds. They are also known as monopole speakers. These speakers are designed to fire sound forward towards the audience.

Monopole speakers are also used in front. However, there are specialized surround and surround back speakers. Let’s have a look at the two most common ones.

These surround speakers have two drivers that effectively fire sound in two different directions. This makes them suitable for pushing sound around the listening area without directly targeting the audience.

Since bipole speakers spread the audio better than the direct-firing ones, they can serve you best as surrounds in 5.1 and 7.1 setups. These speakers are also a perfect choice since the sound from them is in-phase.

Dipole speakers also have two drivers in the same enclosure. However, the sound from it is out of phase. In simple terms, when one of its sides is pushing, the other is pulling, creating a diffuse sound. To get the right effect, you must install these speakers in the correct positions.

Like bipoles, dipoles are most effective as surround and surround back speakers. They spread sound much more than direct-firing speakers do. However, when it comes to positioning, dipoles are less flexible than bipoles.

These speakers have drivers on all sides, making them the most ideal for outdoor applications. The drivers are designed to produce different sound quality. So, you can use them as surround speakers and surround backs if the geometry of your room allows.

What Is The Difference Between Surround Back And Surround?

Is Surround Better For Music?

Stereo sound speakers are usually recommended for playing music because the way music is recorded is suited to stereo playback. However, surround systems can give a really good music playback especially with musically optimized surround sound systems that can reproduce great sounding music, even if the elements are not separated into different channels.

Do Rear Speakers Make a Difference?

While they serve to produce greater and better sound dynamics and should be quite loud, they are never as loud as your front speakers and frankly, you can do without them. They do not have to match up to your front speakers in performance, they are there to balance out the sound from the front and give a fuller, richer sound quality.

Whether a speaker is a surround or surround back is based on how you position them in the listening room. Surrounds work in 5.1 and 7.1 configurations. However, surround backs are only available with 7.1 surrounds.