Here are the scenarios quickly (for a single 4 ohm and a single 8 ohm speaker):

If you have multiple 4 ohm and 8 ohm speakers, you can wire them in different ways as long as the overall impedance is not below the impedance that the amplifier or receiver can handle. However, this is rarely the case and so we can say, you should typically never do this.

Many 4 ohm receivers and amps can handle an impedance an ohm or so below 4 ohms (so about 3 ohms) without extremely overheating or shutting down, but you need to set the impedance switch to its lowest setting and keep the unit properly ventilated.

However, if your amp or receiver is rated at 6 or 8 ohms, then a low overall impedance will put too much stress on the receiver’s or amps’ power reserves.

How Do You Wire 4 Ohm and 8 Ohm Speakers Together?

Many amps and receivers have protection circuits and systems that will cushion you from any likely damage by shutting down the receiver or amp. Some of these devices refer to this as a protection mode and this mode is very important in preventing overvoltage.

How do you wire the two speakers with different impedance ratings together without harming your amplifier?

Before we look at the steps, take note that there are two modes in which the two speakers can be connected:

4 Ohm and 8 Ohm Speakers In Series

In this mode of connection, the total impedance level increases because the speakers are connected end to end. 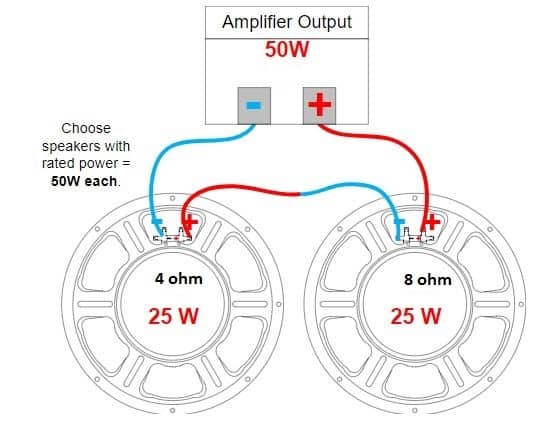 In general, if you have two speakers with impedance levels less than 8 ohms, it is best to wire them in series because this will create a total impedance level great enough to not overpower the amp.

For this scenario, connecting the two speakers will yield a total impedance of 12 ohms, since the formula for total impedance in any series connection of resistors is simply the sum of the two resistors.

The 12-ohm total impedance is in the range of 6 – 16 ohms within which most amplifiers work best. Therefore, performing a series connection for the two speakers on a single amplifier will not be harmful.

Wiring speakers in series is an easy process as you can see in the illustration above. In any case, follow the procedure below.

For more information on how to connect a 4 ohm speaker and 8 ohm speaker to an amplifier, check this guide.

4 Ohm and 8 Ohm Speakers In Parallel 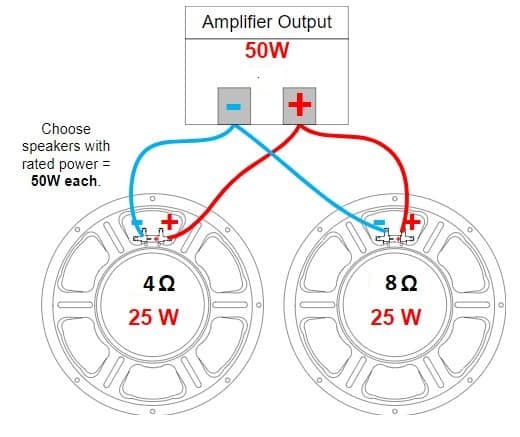 So, when connected in parallel, the 4ohm speaker and the 8-ohm speaker will produce an effective total load of 2.667 ohms, which is very low.

This mode of connection is preferred for speakers which have an impedance value of more than 8 ohms. This is because they yield a total impedance greater than 4 ohms.

For this reason, most hi-fi systems are designed to have a total impedance of 4 ohms or higher. And, the quality of the sound is well maintained at its maximum level.

Therefore, based on the speakers onboard (4 ohm and 8-ohm speakers), this type of connection is not the best to consider. This is because the total impedance will go way below 4 ohms.

Wiring The Speakers In Parallel

If for whatever reason you still proceed with the wiring design of the two speakers in parallel even though the speakers are incompatible in this connection mode, check the steps below:

Because we only have one amplifier for the two speakers, we will connect the amp’s outputs directly to the speakers. There are two polarities a + sign and the other a – sign.

Your amplifier has two wires emerging from the two ports, two positives, and two negatives. One of the positive wires is connected to the positive polarity of the speaker port and the other positive wire to the next positive port of the next speaker. The same is replicated in the negative ports.

Single paired cable from the amplifier is conjoined to the cables from the two speakers with their polarities well considered.

For more information on how to connect a 4 ohm speaker and 8 ohm speaker to an amplifier in parallel, check this guide.

Can I Run 4-Ohm And 8-Ohm Speakers On A/B Terminals?

It’s a good idea to get a receiver or amplifier that has A and B capabilities. For example, you can use the Bs to play music in a different room. It is generally easier to do that than say using zone 2 connections.

You can generally use speaker pairs A + B to run speaker pairs together. However, it is generally recommended that both speakers have a minimum impedance of 8 ohms or higher.

Well, the channels are parallel.

Since the channels are parallel in nature, wiring a 4-ohm speaker and an 8-ohm speaker to the A/B terminal contributes a total of 2.67-ohm load. This is too low for the receiver to handle and will most likely blow the amp.

It is therefore not recommended that the speakers be wired to the A/B terminals.

Before we talk about 4 ohms vs 8 ohms speakers, what are ohms anyway? Ohms is a measure of electrical resistance and is related to ohms law.

Ohms law describes the relationship between voltage, current, and resistance. This is described in a mathematical equation:

According to ohms law, the value of the resistance of a conductor is a ratio of the potential difference or voltage between the ends of the conductor to the amount of current passing through it.

Now a 4 ohms resistance is much lower than 8 ohms. Because just like water only flows in the direction it finds it easier to, electrical current prefers to flow through conductors with lower electrical resistance.

This is because the smaller impedance allows more current to flow through it easier. It, therefore, means that a 4 ohms speaker requires more power to operate compared to an 8 ohms speaker.

Connecting the 8-ohm speaker with a 4-ohm speaker to the same stereo will therefore alter the load line depending on how they are connected. If the overall impedance is too low, this can become dangerous and increases the chances of you blowing up the system.

Can You Mix 4 And 8 Ohms Speakers?

Is a 4 Ohm Speaker Louder than An 8 Ohm?

A 4-ohm speaker isn’t necessarily louder than an 8-ohm. The difference is that the higher impedance speaker is making its power at a lower voltage. So, it will be louder at the same volume setting.

4-Ohm or 8-Ohm Speakers, Which is Better?

A 4-ohm speaker accepts almost twice the amount of power that the 8-ohm speaker requires. Most receivers and amps are rated from 6 ohms to 8 ohms. This means most people who own 4-ohm speakers have to deal with lots of speaker impedance issues.

However, it’s important to note that 8-ohm speakers’ impedance is rarely 8 ohms.  The real number of times when the speaker is 8 ohms is fewer than you can imagine since speaker impedance varies depending on the volume and the frequencies the speaker is playing at a given time. So, an 8-ohm speaker’s impedance might range from as low as 4 ohms to as much as 64 ohms. The same can apply to a 4-ohm speaker.

The simplest remedy is to use a receiver with the ability to handle 4-ohm speakers without shutting down or overheating.

Can I Use The Connection For Speaker B On My Amp For My Extra Speakers?

So, yes, you can mix 4 ohm and 8 ohm speakers. Running the two types of speakers with different impedance ratings is possible. However, the connection should be done in series. This is to safeguard the amplifier or receiver from blowing as a result of parallel connectivity. Note however that the best overall option may be to replace the 4 ohm speaker with a 8 ohm speaker if you have a 4 ohm amp. In this case, you will have a 4 ohm amplifier with 8 ohm speakers and the amp will see a total impedance of 4 ohms when connected in parallel.