If you’ve ever owned a soundbar, you’ve likely used the optical or the auxiliary (AUX) input. These are two distinct ways of transferring the audio signal from your device to the speaker system.

Both input methods are common in modern speakers and audio transmitters, but they are quite different in the way they work.

The main difference between the two is in the connectivity, with aux being analog while optical is digital.

But what does that mean and exactly how does each of these input methods work? We’ll give you in-depth information about these popular formats, weigh their pros & cons, and help you identify the best option for audio clarity with your system.

So, What Does AUX Mean? 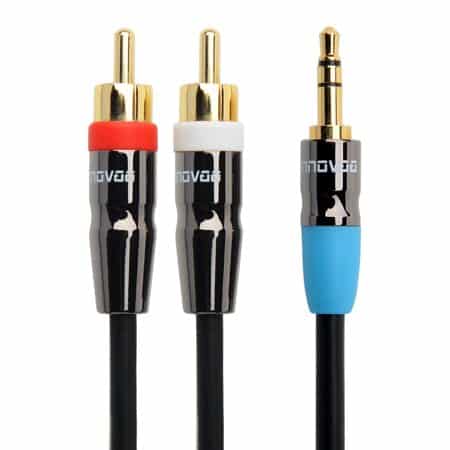 An AUX (Auxiliary) port is a standard communication port that receives analog audio signals transmitted through an aux cable.

This input method came to life in the 1960s, using copper cables to transmit the audio data in a continuous waveform of information in electronic form.

Aux allows the input of audio signals from different compatible devices, including:

It’s also available on your PC as the first serial port that comes with a configured assignment for the most common audio devices.

By contrast, an optical audio input is a digital way of transmitting audio data, originally known as “Toslink” (Toshiba Link).

This modern input method was first invented in the early 1980s as a way to connect receivers with Toshiba CD players.

You can find the port labeled as “optical audio” or “Digital Audio In” on most high-end soundbars, but you don’t need to be an expert to identify it. 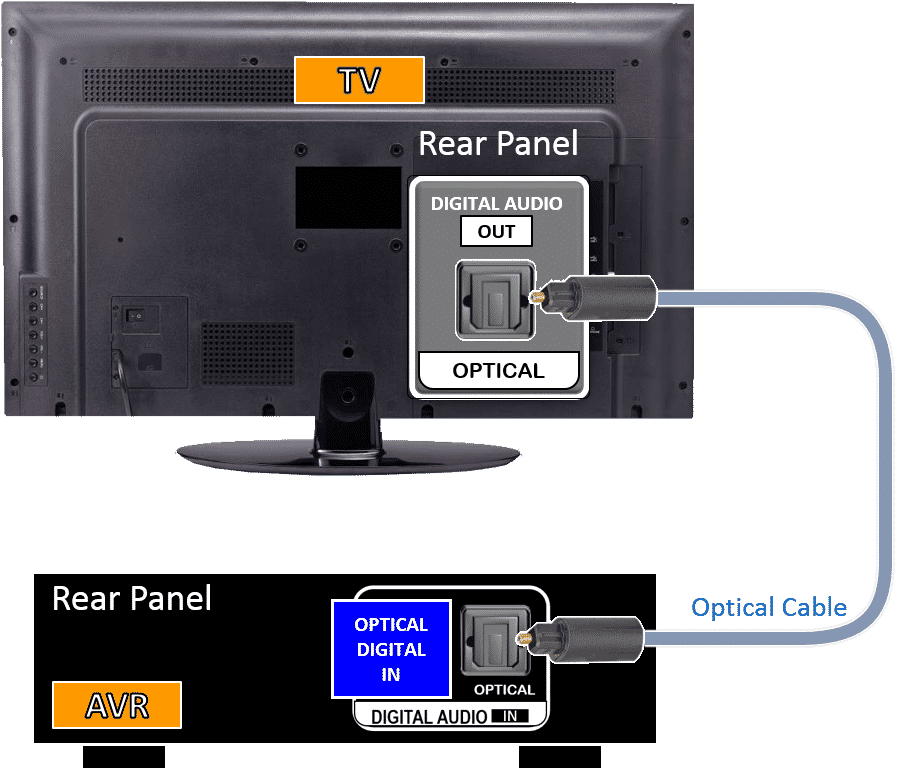 Though the standard is over three decades old, it has gone through several modifications over the years to make modern optical connections as useful as ever.

However, optical cables are highly underutilized as it’s overpowered for most people’s audio needs.

This is why many Samsung TVs use AUX cables to connect to soundbars and other audio devices.

So what does interference sound like? If you hear any kind of hissing, crackling or popping noises then that’s probably interference in the line. This especially occurs at high volume and especially with old, worn cables.

Pros And Cons Of AUX Vs Optical For Soundbars

When connecting your home audio system, it’s important to know how the two input methods compare to each other. 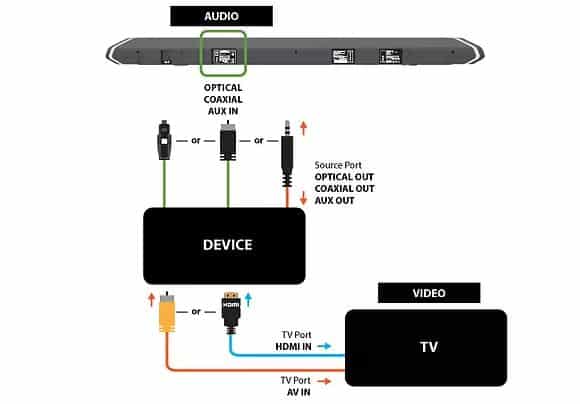 That will help you to know which one suits your needs. As such, you need to have an in-depth look at the benefits and drawbacks that each option carries.

The main advantage of using an AUX input is it’s compatibility with almost all audio devices on the market today.

That means you’ll be able to connect your home stereo or head unit to your audio source whether you’re using an android phone, a walk-man, or an iPhone.

As such, you can use a single AUX cable with all your devices since all you have to do is unplug your music player and plug it to the new device.

Besides being highly compatible with multiple devices, aux cables are readily available on the market at an affordable price.

Additionally, RCA cables maintain excellent signal separation. That’s because they feature two separate wires that help to maintain the quality of the audio over long distances.

The main disadvantage of using an auxiliary input with your phone or portable music player is that the hardware does all the heavy lifting.

Essentially, the phone processes the audio files and transmits the resulting signal through the 3.5mm jack to the head unit.

Since most portable devices are designed with headphones and earbuds in mind, they don’t feature line-level outputs.

That means additional noise can be introduced into your audio signal when passing through the head unit or the amplifier. This noise may also be introduced through aux jacks and cables as well, resulting in audio distortion.

While optical isn’t foolproof when it comes to signal interference, it has several advantages over aux inputs.

For starters, it’s capable of transmitting up to 7.1 channels of high-res audio signals which can be supported by modern home-theater systems. However, there’s no discernible difference in audio quality compared to using an HDMI cable.

Thanks to its ability to support digital audio signals, it works better than aux input when connecting your audio device with a surround sound system.

That’s because it eliminates the need for complex wiring without sacrificing the audio quality. Nonetheless, it also has a few drawbacks.

Though optical input isn’t prone to interference like aux, it can also lose data mainly with long cable runs.

That’s what happens when a few binary “0s” and “1s” fail to arrive at the time down the cable.

As a result, the audio may become a little jittery or result in blank portions. That means a well-routed high-quality aux cable is the way to go over long cable runs.

Should I Choose AUX Or Optical Input For Audio Clarity? 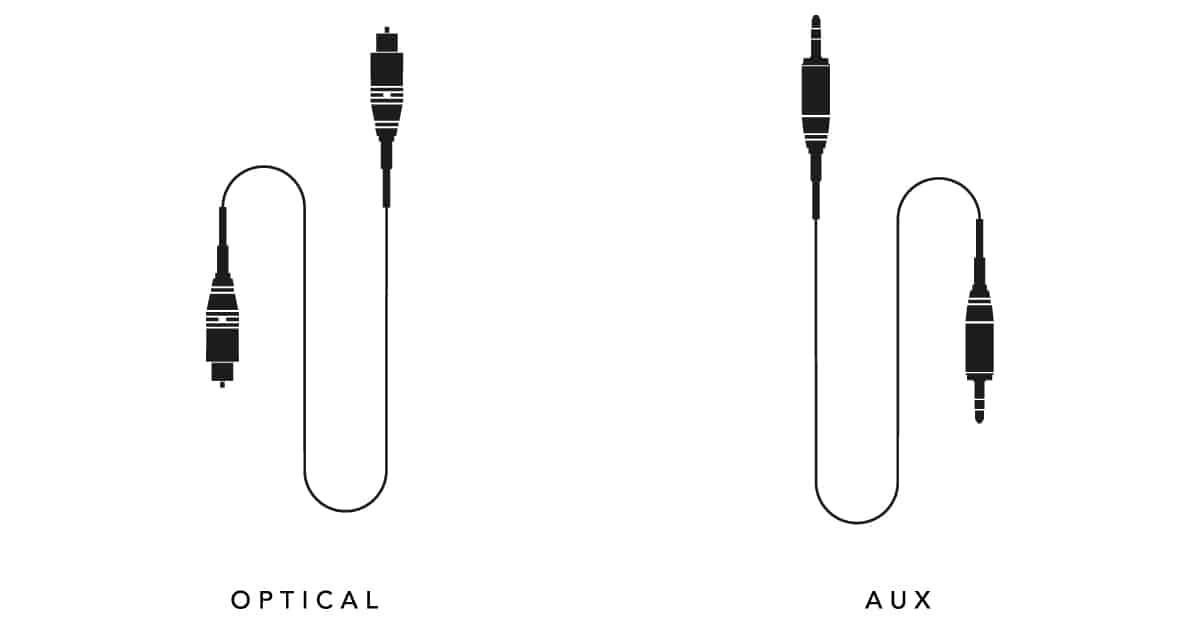 When it comes to audio performance, aux is more prone to interference and line loss compared to the optical input.

With that in mind, most people agree that you get clearer sound performance, superior special quality, and better channel separation with an optical connection.

However, the same people will tell you there’s no noticeable difference as your speakers also have a huge role to play in the audio performance.

Aside from the speakers, the length of your cable, the source device and your hearing ability also matters a lot.

For instance, if you’re listening to an uncompressed FLAC file played using a high-end audio system, you are likely to pick up differences between the two input options.

However, it may not be the same while listening to an MP3 file (128kbps) played from your phone.

Is Aux Good For Soundbar?

AUX IN is an analogue connection  method that is still useful if it is supported on both your TV and Sound Bar ( make sure to connect to the AUDIO OUT port on the back of your TV). This uses a standard RCA or 3.5mm stereo jack cable to transmit an analogue signal.

Due to the fact that it is an analogue output, it may be susceptible to interference. Please keep your cord as far away from the power source as feasible. You may need to use the TV’s settings to enable the audio feature and disable the speakers. Consult the owner’s manual for your television. Only use the volume control on the Sound Bar.

How to Connect Soundbar to TV using Optical Cable

First off, we will look at how you can improve the quality of sound on your TV set by connecting it to a soundbar. Follow the steps outlined below:

So that’s it, the complete aux vs optical for soundbars. In reality, everyone’s audio system is unique. As such, it’s worth trying both input methods if your current audio device supports the two of them.

That will help you to know which option can deliver superior audio quality. However, you may not find any significant difference in the performance through an optical input may come in handy when using a surround sound system. It’s also great with proprietary high-res audio signals.