It’s common to run into an annoying problem where your car speaker cuts in and out especially at high volumes. In this article, we will discuss why your car stereo cuts out when the volume is turned up and what can be done to fix this problem.

There is almost nothing worse than rocking out to your favorite music after a long, hectic day at work only to be rudely interrupted by silence. Having speakers cut out at high volume is an issue most drivers with older or poorly-made car stereo models will come across.

The main often reasons car speakers or stereos cut out at a high volume when the volume is turned up are amplifier, wiring and crossover settings issues. In addition, some speakers are not designed to handle certain high volumes and may up out when overpowered. 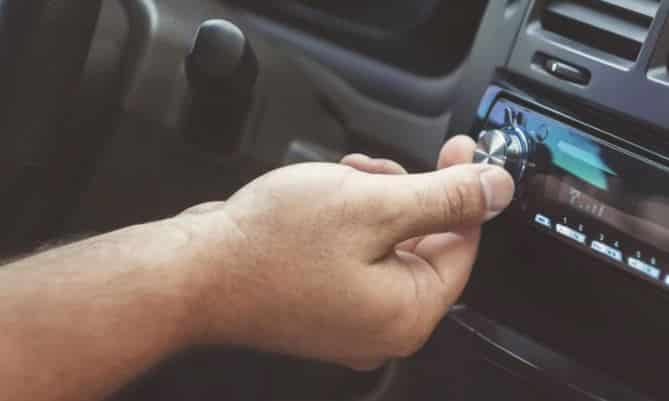 This mostly happens in some of the newest, best stereos. It is basically the stereo’s way of protecting itself from extensive damage and can be caused by a myriad of issues. Use the checklist below to perform a process of elimination and find the cause.

Car Radio Turns Off And On While Driving – Causes and Solutions

If your car radio turns off and on while driving, then the most common culprit is often the alternator, amplifier or there may be a voltage issue. 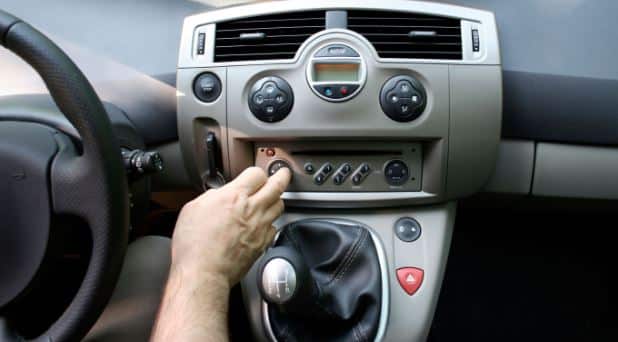 When dealing with circuits within an enclosed space, you must always take into consideration the voltage consumption of all the gadgets connected to a power unit.

In some scenarios, the reason why the stereo might cut out could be due to the alternator not providing enough charge to the batteries.

This means that the stereo will cut out due to there not being enough power supply. This coupled with the increase in volume or bass will cause more energy to be drawn quicker.

The more power is drawn toward the deck, the quicker the voltage drops. This causes the power to cut off and when the current draw has stopped, the voltage will rise again creating a cycle.

Solutions: Using a voltage meter, you can record the amount of power that is being drawn. A reading below 11.5 volts, will signal possible power failure of the batteries. Usually, running diagnostics with this issue will produce results where each measurement will cut out at a lower volume every time a new reading is done because of the battery levels dropping.

#1: Suspicious that this is the case? Then a heavy-duty alternator and battery might be required to maintain a stable supply of power especially if there are other gadgets connected to the supply. It isn’t necessarily both. The amplifier might just not be capable of keeping up with the power demands or maybe there are too many power-sucking gadgets connected.

#2: If you are on a tight budget or just want a quick fix then try adjusting the frequencies and bass settings lower so that the power withdrawal is more balanced.

During production, the wire connections are usually soldered or twisted and then taped together in place.

In some cases, a wire might require tightening preceded by resoldering or using butt connectors to secure the wires. This, however, might require slight stripping of the wires beforehand. 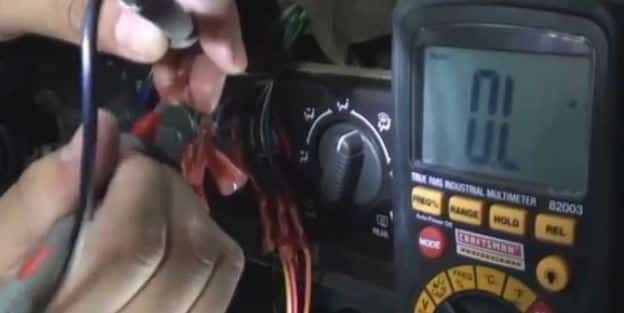 Other issues with the grounding can be linked to a short somewhere within the stereo, especially ones that have pre-installed circuit fuses within the head units.

The issue arises when a blown fuse is still capable of conducting electrical contact within the circuit causing irregular performance. Poor grounding can also disable the amplifier’s ability to pull power which is another source of cut-outs. 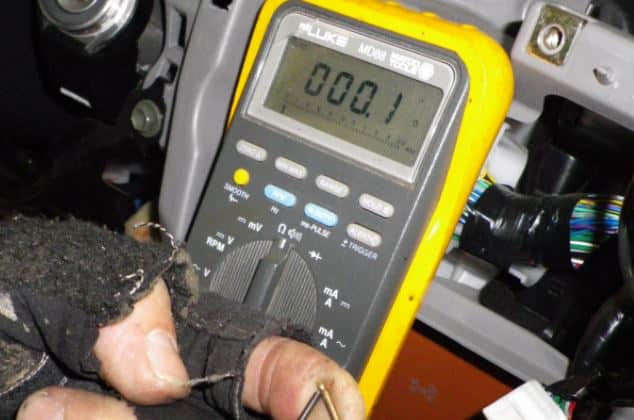 Other issues with the grounding can be linked to a short somewhere within the stereo, especially ones that have pre-installed circuit fuses within the head units.

The issue arises when a blown fuse is still capable of conducting electrical contact within the circuit causing irregular performance.

Solution: To find out if a blown fuse is the cause of your issues, first, switch off the power supply. You will need a multimeter set to ohms (electrical resistance) and testing leads.

Next, use the testing leads of the multimeter to tap against the metallic fuse caps and record the reading.

If you receive a reading then the issue is most likely not a blown fuse, however, if there isn’t one, then the fuse has blown. If your fuse has blown then you will need to simply find a suitable replacement and recalibrate the system.

Speakers Cutting Out At High Volume Cause

1. Having Too Much Output Connections

Having your car stereo cut out when the volume is turned up is very often due to having too many output connections. 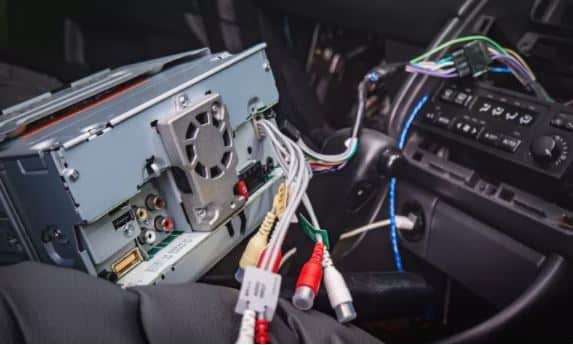 Matching a stereo to other connections might be another issue. In this case, some stereos can only power up a limited amount of speakers e.g. 2 speakers instead of 4 and changing the wires will not make a difference.

Solution: Swap out a cheaper amp for a more heavy-duty version along with a stronger ground unit to keep everything balanced.

Using high-quality materials means that you can also increase your bass and have a better stereo experience. Sometimes older models will simply guzzle more power just as an older car guzzles more gas.

2. The Wires Gauges Are Incorrect Or Improperly Installed

Sometimes your car speaker goes in and out because there are issues with your gauge connections. Double-checking the gauge connections are the right sizes and properly connected allows the correct flow of power. 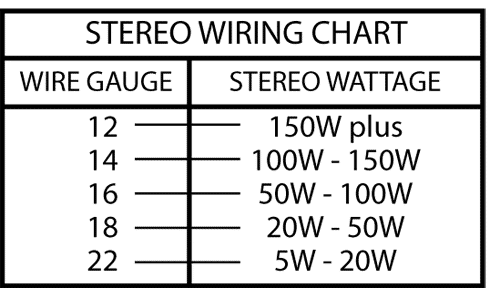 If the wires are too small then not enough power will be supplied to the speakers and stereo size resulting in cuts out at higher volumes. Loose, improper installation of the gauge wires will also cause connectivity issues, especially when driving over a rough patch on the road.

This will lead to the stereo either kicking out, unstable audio or cutting out as well as further damaging the wires. If this is the case then tighten the ground wires and secure them back in place with extra reinforcements.

Likewise, if you have had no issues until recently then there is a good possibility that the wires could have been damaged especially if you often travel over rough terrain, jostling wires out of place and causing wire stretching or rubbing. 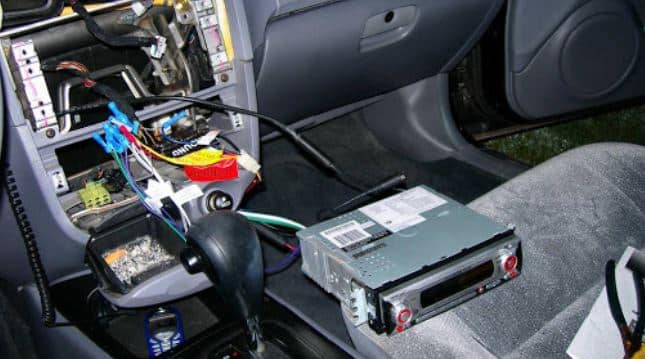 There is also the issue of the environment in which the car spends the majority of its life. For instance, if you live in an area where there is a lot of salt in the atmosphere e.g. by the sea-side, then corrosion and rust will definitely play a part.

If so, you might need to properly seal the gaps around the stereo system to protect the wires. Of course, there might be just natural corrosion which can just be cleaned, replaced and protective with rust sealant.

Speakers Cut Out Randomly Cause

1. Overheating Of The Power Unit

The stereo unit and power supply draw power and heat, which increases when listening to the stereo at higher volumes and for extended periods. 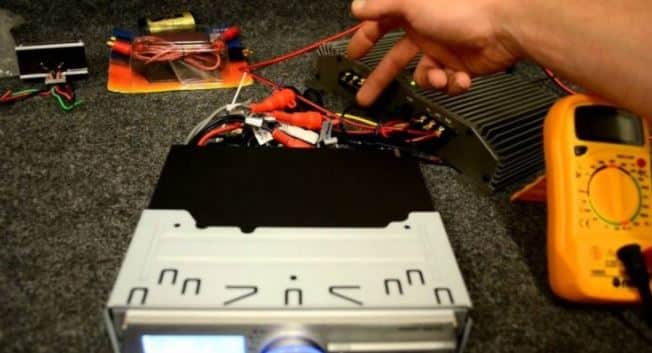 This means that if the stereo deck doesn’t receive enough airflow then the amplifier will cut out. Defective wire connections tend to be the major cause of why stereos overheat.

Solution: To solve this issue, open up the deck and check the wires ensuring that the wires are in their respective places and not crossing over. If some are out of place then resoldering or retaping may be necessary.

How Do I Stop My Speakers from Cutting Out?

Why Do My Speakers Keep Clipping?

When more power is required from an amplifier than it is capable of providing, clipping occurs.

When the maximum amount of power supply voltage has been reached, it becomes impossible to boost the incoming signal without causing changes in its shape.

This means that the signal is amplified but in a very distorted form.

Why is My Car Stereo Smoking?

If your car stereo is smoking, then it’s a problem with the right channel pre-amp or output stage and not your power supply.

If your speaker wires (or speaker) appear to be shorted on one side, you should inspect them for a potential short.

Having your speakers cut out at high volume is certainly an annoying problem. It can also be time-consuming to solve given that a car stereo turns on and off repeatedly may be due to several different reasons.

But who wants their speakers to cut out randomly? Solving the issue is not straightforward even for smaller gadgets such as car stereos and a process of elimination to determine the cause will be necessary.

If you are unfamiliar with doing the solving yourself then have it serviced by professionals. Better yet your car was bought new with the stereo unit and is still under warranty then take it back to have it looked over.