If you only have one subwoofer, check out our guide on how to bridge a 4 channel amplifier to 1 subwoofer.

Bridging A 4 Channel Amp To 2 Channels For 2 Subs

Bridging any kind of amplifier may initially seem very difficult. However, once you learn the process, the process becomes seamlessly easy.

Basically, the bridging process is the same and applies to all types of amplifiers. If you learn to bridge a two-channel amp, bridging four-channel amplifiers becomes much easier.

Amplifiers may commonly have channels up to four. If you intend to bridge a four-channel amplifier, you will follow the step-by-step procedure we have outlined below.

Before you begin the process, you need to have some materials to work with. Here’s a list of what you need:

The most common way to have your amp bridged is to connect it to a pair of 4-ohm subwoofers. Follow the procedure below to bridge the amp:

The Bridging Process Of A Four-Channel Amplifier

Since you already have the right materials, you can begin the process. You must however understand the location of the positive and negative channels of the amp.

To avoid any doubts, see the clarification of the channels below. 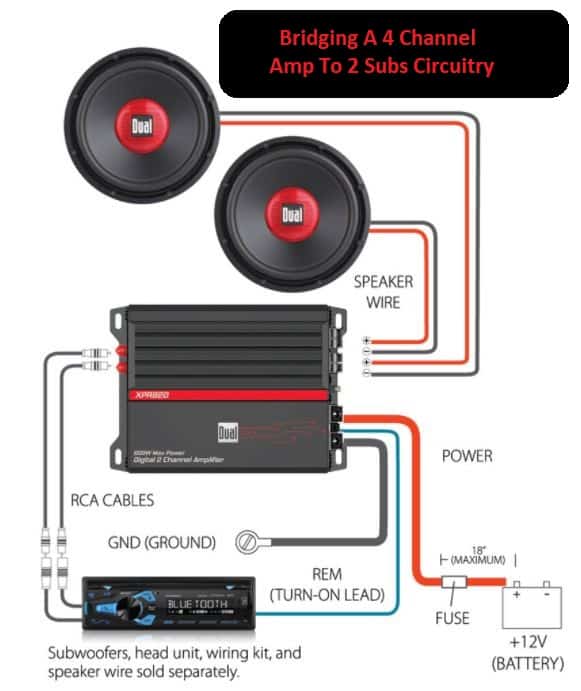 Channel 1 of the amplifier has two terminals – positive and negative. The first is the positive one, and the second is the negative one.

This channel is also similar to channels 1 and 2. Besides, the terminals are the same.

Channel 4 is the last in your four-channel amp and has two terminals similar to the other channels. The positive and negative terminals are also positioned the same way as in the previous three channels.

From the description of the four channels above, it is now clear where to find the positive and negative terminals.

Now, move the screw of terminal 1, of channel 1 to the anticlockwise direction. Put the red wire into terminal one, to the positive option of the first channel.

Put the black wire into terminal four, to the negative option of the second channel to complete the connection of the first sub.

Repeat steps 1 and 2 to connect subwoofer two through terminal five and terminal eight of the third and fourth channels.

How To Bridge An Amp With 2 Subs

Most amplifiers when bridged, cannot provide enough power to drive a sub with an impedance less than 4 ohms. To bridge an amp with 2 subs, you will need to run them in stereo which does absolutely no good for sub duty.

Wire the amplifier with each subwoofer on separate bridged channels and expect good results.

For the many amplifiers, the right negative and the left negative are the primary signal outputs. You will need to first locate the amp terminals before bridging a two-channel amp or a four-channel amp.

You should however avoid wiring the subs in series as that will not deliver much volume and power from the system.

What’s The Best Way To Bridge A Subwoofer

Generally, the term “bridging subwoofers” may be a bit misleading. In a good sense, the phrase refers to wiring a sub to a bridged amp to drive deeper bass to the sub. It is important to learn the ins and outs of the bridging circuit as any problem can easily damage your devices.

Step 1: Prepare To Wire The Subs To A Bridged Amp

How Do I Connect 2 DVC Subs to a 4 Channel Amp?

To connect two subwoofers to one amplifier, you will need three speaker cables.

Two of the speaker wires are for connecting your subs in mono while the third wire is used as a ground wire that connects both amps into an electrical system.

This type of set-up works well if you have only one space on your amp for input and output connections because it requires less wiring than having separate inputs/outputs on each channel.

The best way to bridge a 4 channel amp to 2 subs at 4 ohms is to use a single channel of an amplifier that can be bridged.

Next, connect the positive and negative wires from each sub to the corresponding speaker output on your amp.

Once this is done it will allow you to have more power being delivered to these two subs at once.

The only thing left would be connecting the ground wire for each sub.

This way, all four channels will power two subs at once but they will be sharing amps channels. So, don’t expect both of them to perform similarly because they won’t!

However, they’ll still bump harder than having just one running on its own channel before doing the bridge process.

At the end of the day, however, note that the best option for a subwoofer is to get a monoblock amplifier. A monobock amp is better for a suwboofer than a 2 channel or 4 channel amplifier.