If you have a four-channel amp and just one subwoofer and wondering if you will be able to have the connection, do not worry. In this article, we explain how to wire a 4-channel amp to one subwoofer.

If you have 2 subwoofers, check out our guide on how to bridge a 4 channel amplifier to 2 subwoofers.

Normally, 4 channel amplifiers are designed to produce mids and highs for door speakers for the front and rear of the car. Connecting a 4 channel amp to a 1 subwoofer is possible, however, you will need a Low Pass Filter on your amplifier. Remember, your subwoofer uses frequencies passed by the low pass filter.

Bridging The Amplifier: In looking at how to connect a 4 channel amplifier to 1 sub, you may have come across the concept of bridging. Basically, bridging means that you take two channels and connect them together to add together the power outputs from both sides.

Example of Bridging: As an example, let’s say you have a 4 channel amp that has 2 channels front rated at 150 RMS each. If you bridge them together, you will end up with 300 watts RMS per channel after being jumped (connected together). It’s similar to how you would wire two amplifier channels to one speaker. If your subwoofer is rated at 300 watts, then this will be sufficient to power it. However, 150 watts would not power it.

How To Bridge A 4 Channel Amp To 1 Sub

Bridging any kind of amp may first seem critical and tough. However, once you know the accurate process, it becomes very easy and anyone can DIY no matter how many channels your amp comes with.

This is because the main process is the same for every channel and once you learn how to bridge a two-channel amp, you will be able to bridge a four-channel amp too.

If you have a four-channel amp, you can easily double its power output by bridging it. This way, you will be able to drive much more power to your speakers.

With the basic knowledge of car audio wiring, you can easily bridge a four-channel amp. 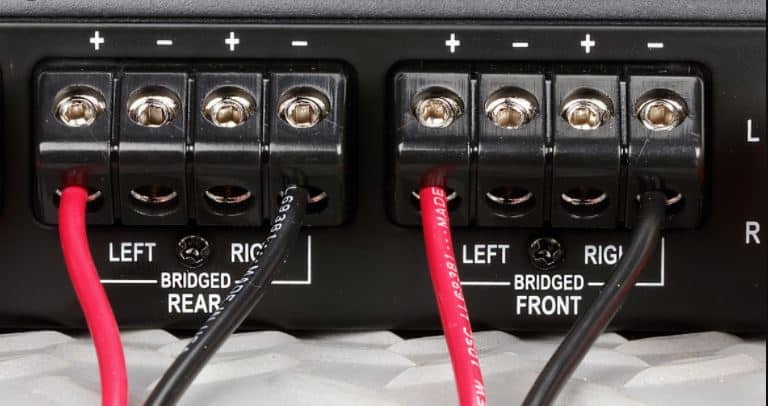 Before you begin the process, you need to have some materials to work with. Here’s a list of what you need:

The most common way to have your amp bridged is to connect it to a pair of 4-ohm subwoofers. Follow the procedure below to bridge the amp: 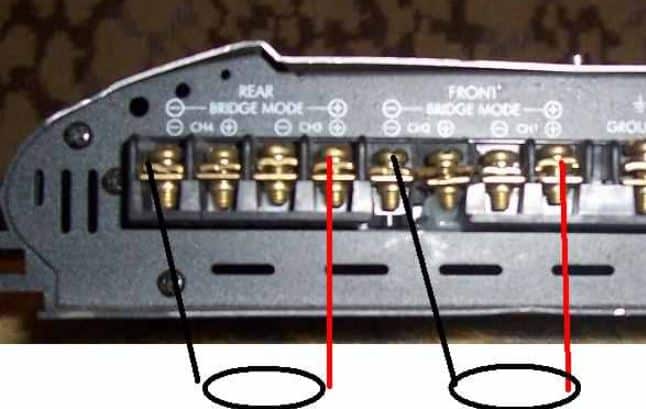 Each of the terminals has a screw-down clamping system that helps to hold the speaker wire in place. 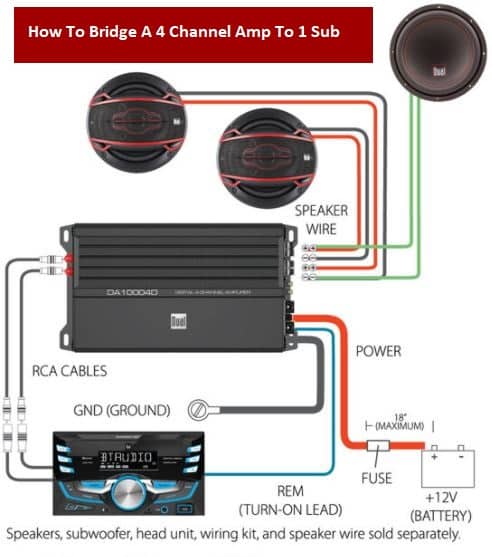 Step 2: Connect The Positive Terminal Of Channel One To The Subwoofer

Ensure the speaker wire is securely clamped down using a screwdriver in the amp’s terminal.

Step 3: Connect The Negative Terminal Of Channel Two To The Subwoofer

Clamp down the speaker wire and ensure the connection is secure by tightening the terminal screw-down clamp.

Step 4: Repeat Steps One And Two For Channels Three And Four

Here is a guide on how to connect your amplifier to your subwoofer if you don’t know how.

Although a four-channel amp provides greater flexibility for your audio connections, they are mainly used with four-speaker or two speakers and a subwoofer, not both.

However, you can still wire a 4-channel amp to four speakers and a sub. Fortunately, you can do this with three methods.

This is the most common setup. Each front amplifier channel is wired with two speakers in parallel for 2 ohms per channel.

The subwoofer is then connected to the two rear channels. Remember to check the amp’s bridged wiring instructions as not all amps use the same bridged wiring.

In this method, each front amp channel is wired with two speakers in parallel for 2 ohms per channel. The subwoofer can be either 2 or 4 ohms.

You can wire two speakers and a subwoofer to a four-channel amplifier. You will, however, need to bridge two of the channels to power the sub while the two speakers are connected to the other two channels.

Can You Use A 4 Channel Amp For 1 Sub

As we already said, you can easily bridge two outputs to the sub and leave the other two channels for the front speakers.

How To Bridge A 4 Channel Amp To 2 Subs

Bridging a four-channel amp to two subwoofers is an easy process. Just like we have discussed above, you can bridge your four-channel amplifier to two subs easily by following the process we have outlined below.

Remove about ½ inch of insulation from the wire with the wire stripper.

Put the red wire into terminal one, to the positive option of the first channel.

Put the black wire into terminal four, to the negative option of the second channel to complete the connection of the first speaker.

Repeat steps 1 and 2 to connect speaker two through terminal five and terminal eight of the third and fourth channels.

To learn more, check out our complete guide on how to bridge a 4 channel amplifier to 2 subwoofers.

What Happens if You Bridge a Non-Bridgable Amp?

You can’t bridge a non-bridgable amp. You’ll need to make sure the amps you purchase and install are compatible with your stereo system, as well as each other.

If they aren’t bridgable, you won’t be able to do anything but replace them both.

You can also look into buying an aftermarket receiver that offers additional channels of amplification for subwoofers (or “satellite speakers”).

When Should I Bridge My Amp?

When you bridge the channels, this increases the power output.

Therefore, this is usually the best time for you to consider bridging your amp.

Does Bridging an Amp Change the OHM Load?

When you bridge an amplifier, you are essentially using it as a mono amp.

That means the impedance on each channel is cut in half because there’s only one load being driven instead of two.

What changes with this setup is maximum power output by splitting up the wattage between both channels and putting them together to drive one speaker or subwoofer.

At the end of the day, however, note that the best option for a subwoofer is to get a monoblock amplifier. A monobock amp is better for a suwboofer than a 2 channel or 4 channel amplifier.