A very common discussion in the computer audio production industry is audio interface vs DAC.

People ask, which is better? Which one should I use? What is the difference between Audio Interface and DAC?

In this article, we will explore the differences and similarities and give you a better grasp as to which one is most suitable for you, especially considering how expensive these devices tend to be.

The main difference between a DAC and an audio interface is:

A DAC is a Digital to Analog converter that takes digital audio data from a device and converts it into an analog signal that an audio system can play. On the other hand, an audio interface has a built-in DAC, but it can also convert the analog signal into a digital signal to be recorded. They can also record mics and other recording devices.

First of all, both audio interfaces and DACs allow you to produce better and more accurate sound quality from your system for better music production.

The main difference between an audio interface and DAC lies in their functions and drivers. 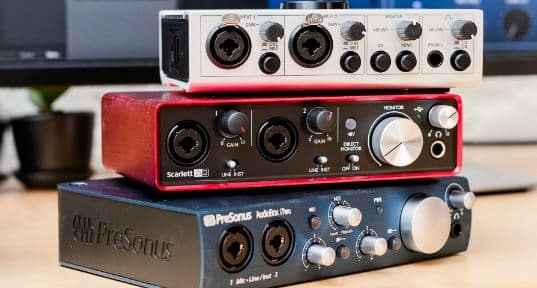 Also, audio interfaces are multipurpose devices with inputs for recordings e.g. podcasts and outputs for digital to analog conversion. This also makes them great for recording live instruments.

On the other hand, DACs are dedicated to digital to analog converters. DACs are great for music production using virtual instruments.

In general, DACs will produce cleaner converted audio than an audio interface around the same price.

Also, DACs are very important to prevent any interference from other components in the computer. However, many prosumer-grade interfaces contain powerful DACs that perform as well as or even better than dedicated DACs. Additionally, DACs don’t generally have a perceivable gain over noise and impedance.

In addition, if you are working with regular computer systems and simple audio devices, then you can use a simple DAC or just rely on the sound card. To learn more, check our guide on soundcards vs DACs.

Audio interfaces are very important devices for users who wish to make recordings of their music on their computer (i.e. computer-based audio production), while DAC is an audio tool commonly used with computers also to transform digital data signals (computers recognize only digital information) into analog audio signals. 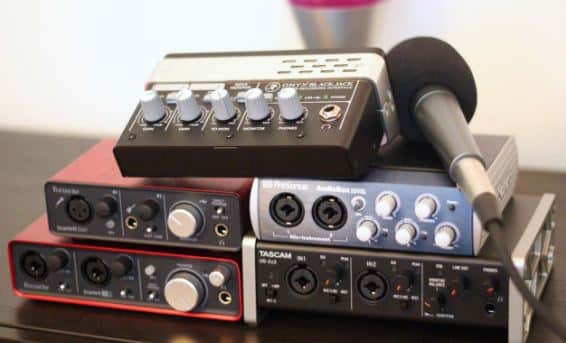 Comparing an audio interface and a DAC is very important, as knowing the difference will help in understanding how you can go about getting quality audio from a computer.

Let’s explore the differences when looking at the pros and cons of both types of devices.

Why Use Audio Interfaces 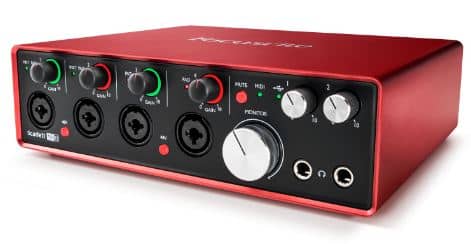 Audio Interface Connections: Audio interface gives users the ability to connect professional microphones, instruments, and other kinds of signals to a computer, and output a variety of audio signals. Apart from expanding your inputs and outputs, audio interfaces can also greatly improve the sound quality of your computer.

Every time you record new audio or listen through speakers and headphones, the audio interface will reproduce a more accurate representation of the sounds.

An audio interface provides a variety of connection ports (such as the ADAT, FireWire, USB, S/PDIF-RCA, XLR, BNC, TS, TRS, RCA, and MIDI).

The FireWire Port: The FireWire port for example can be used if users want to probably track and overdub with multiple microphones or instruments simultaneously; the TRS (Tip, Rings, Sleeve) connection port is useful in the production of a balanced line-level connection. 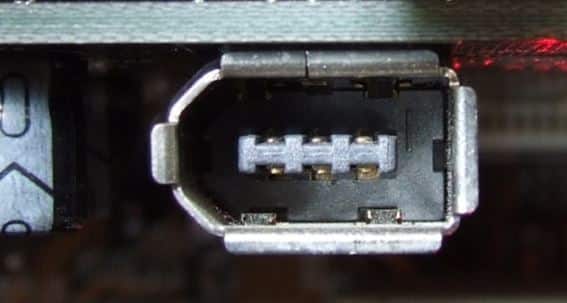 MIDI ports allow users to send MIDI information (a simple language that enables pieces of music-oriented hardware to communicate with each other) into and out of a computer.

Most times, users prefer the USB interface because it provides the best benefits to many professional users. All other ports provide unique functions too.

Why Use DACs (Digital To Audio Converters)

Do you need a DAC? Does a DAC make a difference? You will hear many arguments one way or another. In general, a DAC won’t make an audible difference unless your system is experiencing interference (noise) from ground loops and so on. Find out more by reading or article where we explain whether a DAC makes a difference.

DAC Function: DAC is very important because it translates the binary digital signals of 0’s and 1’s (from the computer) to analog audio signals, and there are various DACs depending on the kind of setup users want. 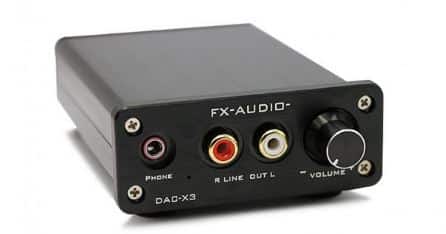 There’s the portable DAC, which is a useful device for users that like to listen to music while on the go or traveling.

Portable DACs can be as small as a thumb drive and are small, affordable solutions for audio improvement, and they can be a USB and battery-powered portable DAC.

USB DACs will connect to your computer or tablet with a USB Type-A connection. These DACs are usually convenient to pack in your bag or with your headphones in any scenario and provide a substantial upgrade in the audio output of your device. Also, USB DAC can be used to connect a computer to an amplifier.

DAC Uses: Digital to Analog Converters can also be larger, heftier units that are suitable for desktop and home system applications.

There are a couple of factors that contribute to the improved sound you’ll get from an external DAC. The most prominent is reduced digital noise from surrounding hardware. Better components also play a role.

A good example in which you may use a DAC is in the case where you want to convert an optical digital out to analog audio.

In this case, you can complete that connection directly with the DAC. In cases where your DAC only has a USB input, you can actually convert digital optical out to USB in and then go from the DAC to analog.

DACs Amplification: Some DACs also include their own amplifier. These are more powerful than built-in amps and can also offer a big improvement in sound reproduction.

An underpowered built-in amp can lead to all kinds of noise in the signal chain when paired with outputs that expect a strong signal. 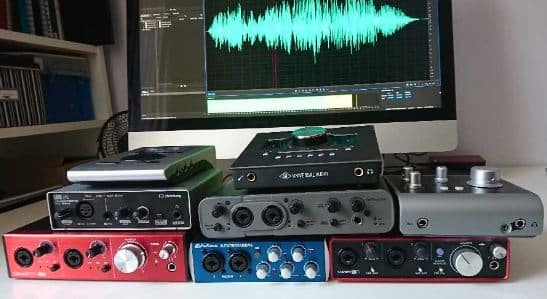 Well, in general, normal, cheap dedicated DACs do a better job at digital-to-audio conversion than the DACs in normal, cheap audio interfaces.

However at higher price points, when dealing with professional devices like the RME Babyface Pro, you’ll find that the DACs in these audio interfaces are right up there with dedicated DACs.

When You Shouldn’t Use Audio Interfaces

Are Audio Interfaces Necessary For Your Setup: One major con for an audio interface is that it adds an extra piece of gear to the user’s setup. 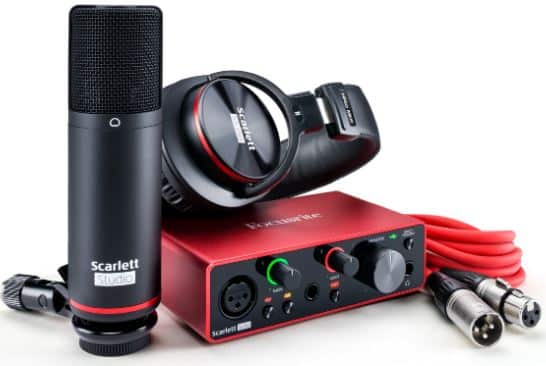 This is probably more of a problem for a laptop producer but really if users needed to mic something properly into a laptop, any user would need an external mic anyways (unless you are just using the built-in mic) which would also cause you to carry around extra gear, and also having to manage another piece of gear can slow down work rate.

Audio Interface Latency: Often times too, cons associated with using an audio interface include price, sound quality, latency, and sound control. For example, most (but not all) USB microphones have latency problems.

In other words, there is a delay between the time the sound enters the mic and the time it exits your headphones. Most audio interfaces are designed with low latency in mind.

Also, USB microphones always do exactly whatever it is built to do, and they tend to sample at bare minimum rates (many are designed for podcasting) which results in a considerably less professional-sounding recording.

During recording, that can be distracting, because you’ll hear your voice or your instrument coming back a little late, which can totally throw your timing off.

When You Shouldn’t Use DACs

DACs and Jitter: DACs don’t really come up with so many cons but most commonly, it is important to watch out for DACs with some form of jitter reduction. A jitter is a digital event that affects the timing of the digital pulses. 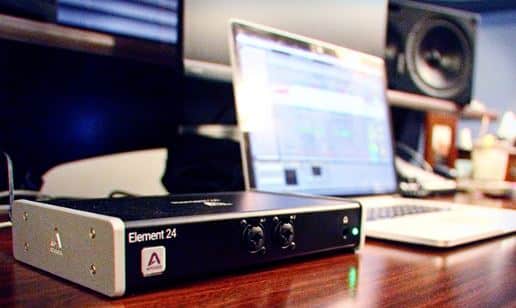 It is sometimes described as ‘shaky pulses’ and if controlled or eliminated can improve sound quality.

Is There a DAC in An Audio Interface?

Yes, every DAC has a built-in DAC, just like smart TVs, computers, and phones. You can improve your current setup’s audio quality by using an audio interface as a DAC.

Is an Audio Interface Really Necessary?

It would be best if you had an audio interface for professional music production. Since this quality is lacking in most sound cards provided inside desktop computers and laptops, you can’t do without it if you are serious about getting top-quality sound.

Is a DAC Better than An Audio Interface?

No, a DAC isn’t better than an audio interface. That’s why you can replace it with an audio interface and still get outstanding-quality sound. Audio interfaces come with analog outputs, which have DACs. Moreover, audio interfaces are designed to playback quality audio at ultra-low latency, an essential feature for experienced gamers, DJs, music producers, and music lovers.

So that’s it, the full scope of audio interface vs DAC. An audio interface assures great sound quality when making basic recordings with any modern device that possesses a built-in sound card. They are especially great for recordings like podcasts.

If audio recording is important to you, and you have the money for it, get an audio interface and try to get one with great D/A conversion like the RME Audio Interface (BABYFACEPRO). If on the other hand, you are not using your devices for audio recording, and just need the ability to lets your computer talk to equipment that usually uses analog signals, then a DAC like the Cambridge Audio Digital DacMagic Plus DAC. is the way to go.

The bottom line, these audio connection hardware tools prove to be invaluable for users who want quality audio production.